A bot is a program designed to perform various tasks without human intervention. But what can you do with an army of bots at your disposal? You can infiltrate even more devices, launch a massive cyberattack, and take down entire networks. In this article, we’ll explore what a botnet is, and how it works. 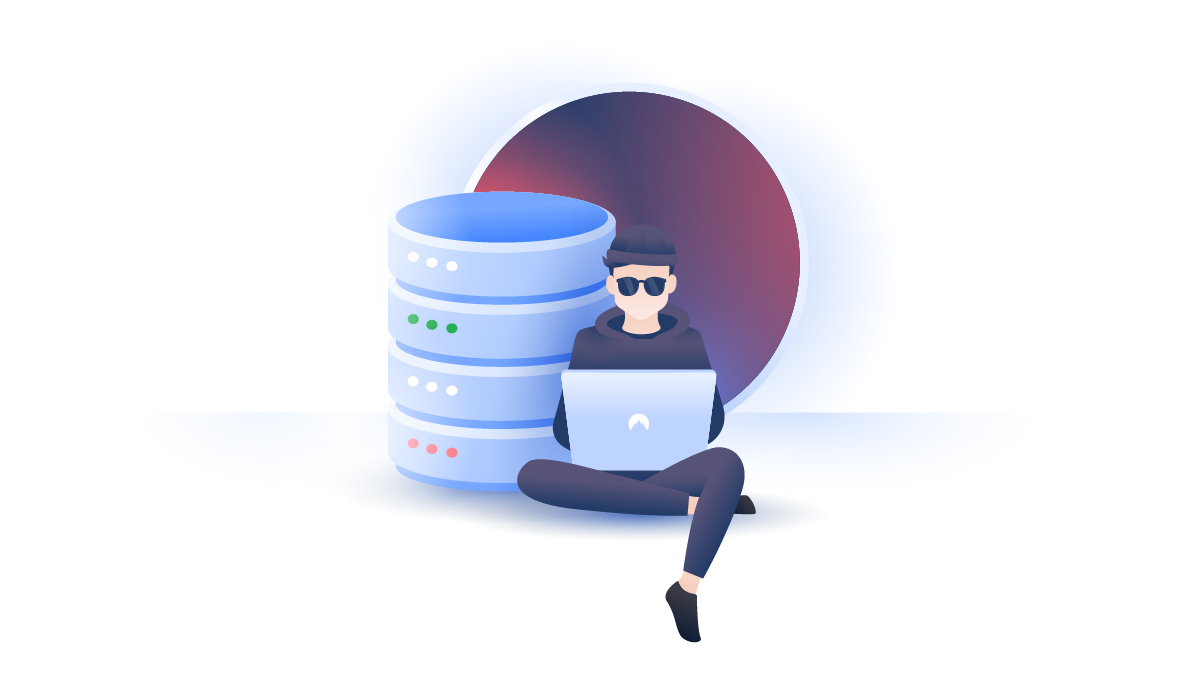 A botnet (short for “robot network”) is a large collection of infected devices (called “zombies”) that take commands from a hacker. When your computer, tablet, router, or smartphone is contaminated with certain malware, it can spread it to other devices, making the botnet even larger. Most of the time users have no idea that something is wrong with their operating system, as all malicious activities take place behind the scenes.

Hackers use botnets to maximize their criminal efforts and carry out as many malicious actions as they can. One hacker relying on one device has a limited ability to cause damage and make money. But if they have a network of bots, they can conduct attacks on a much larger scale.

Wrongdoers searching for system vulnerabilities and creating botnets are called “bot herders”. Criminals sometimes rent out their “herds” to other hackers, so maintaining and expanding them can pay off even if they don’t launch attacks themselves. 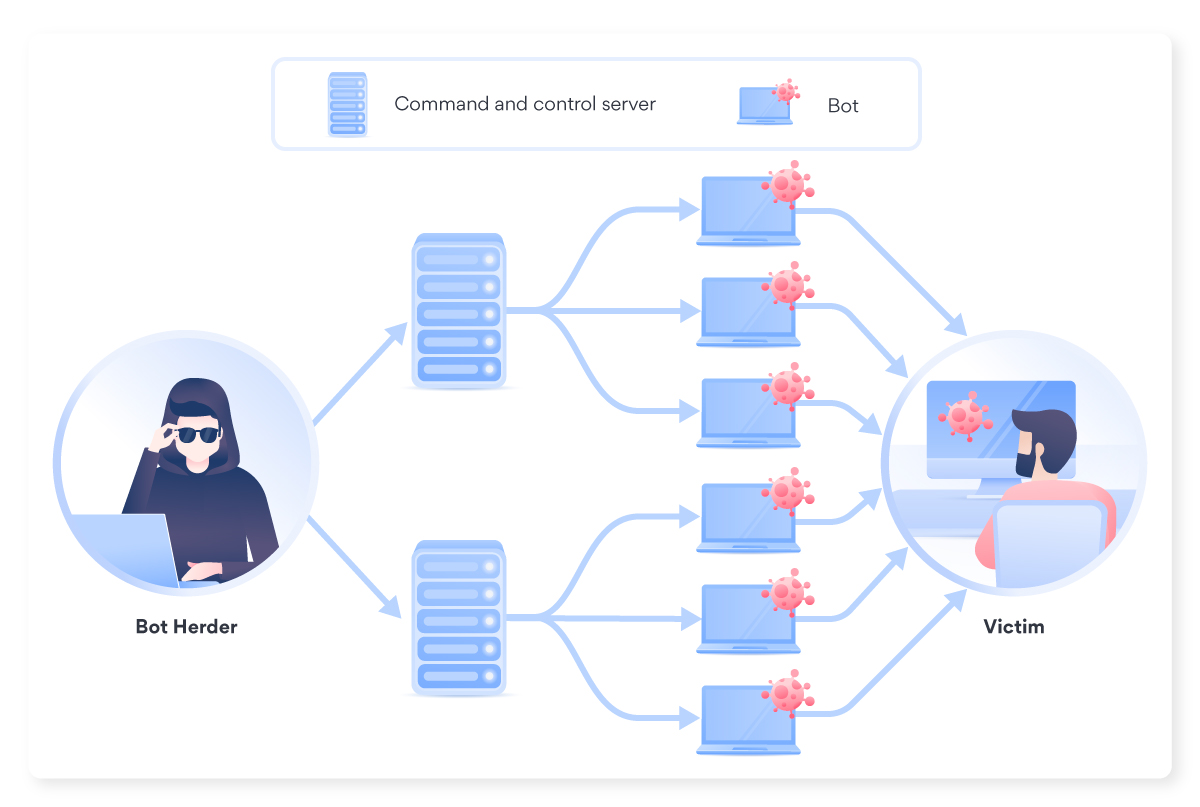 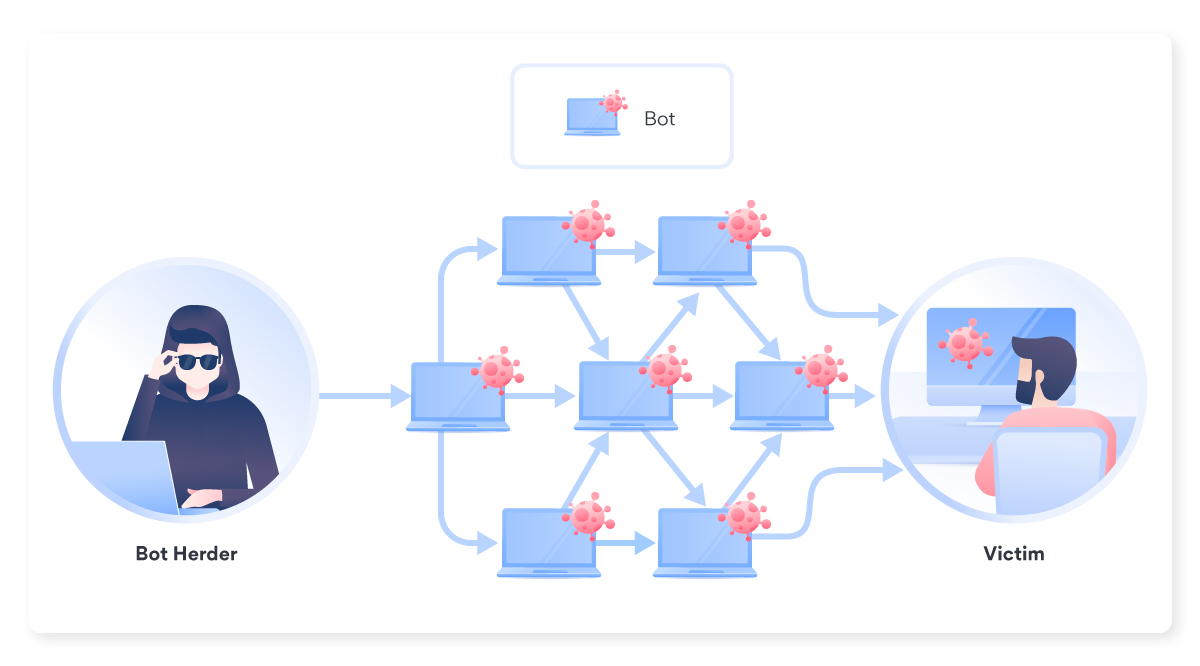 Hackers target a specific website, server, or network and send in their bot army. The bots clog the network with traffic, causing services to crash and denying access to genuine users. There are a number of reasons perpetrators conduct DDoS attacks:

In 2020, multiple banks and financial institutions in Australia received emails threatening to carry out DDoS attacks unless they paid a ransom. These types of threats became common for many large organisations which relied on the internet. If a DDoS attack took down their website or application, every minute could cost millions of dollars in lost revenue.

Hackers use phishing emails to conduct ransomware attacks, spread spam, steal your personal information, or even add your device to their bot army.

Cybersecurity experts say that more than 3 billion fake emails are being sent daily, which couldn’t be possible without botnets.

Hackers use botnets to conduct brute force attacks, allowing them to break into private networks. Botnets can try combinations of commonly used passwords and report the results to the control center.

Sometimes it can be really hard to notice if your computer had been turned into a “zombie”. However, if you’re experiencing any of these signs, your should be on your guard:

Take cybersecurity into your own hands with a VPN. Try NordVPN free for 30-days.