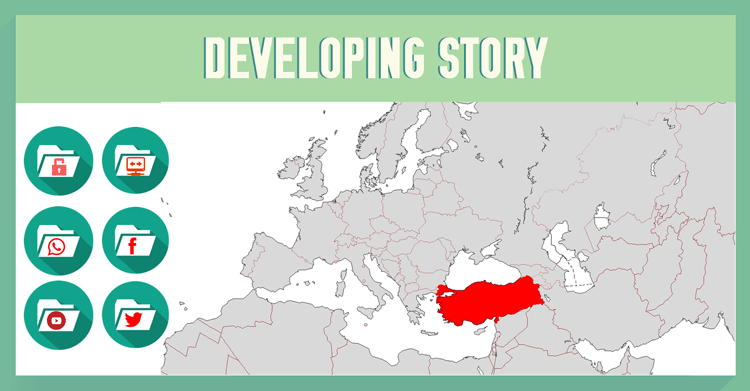 About a month ago, we wrote to you about how Turkey had taken steps to block user access to Google Drive, Dropbox and Microsoft One. Since then, the restrictions seemed to have been lifted, and others seemed to have taken their place. The newest restrictions: social media sites like Facebook and Youtube, including messaging service WhatsApp, have been shut down in Turkey.

Further restrictions have also been recorded on Twitter, Skype and Instagram, and has been identified as ISP level throttling meant to slow down service to these social sharing and messaging sites and services. The outages were first reported on November 4, 2016, by the site Turkeyblocks.org, which monitors internet restrictions by the increasingly authoritative Turkish government.

Why is this happening?

As you may remember, the Turkish government, and especially Turkish President Recep Tayyip Erdoğan, has been on a warpath against any and every instance of protest since the failed coup against his government in July 2016.

From that moment on, the country has been in an ongoing State of Emergency, first implemented immediately following the failed coup, and then extended for a further 3 months on October 3, 2016.

In that time, over 110,000 people have been dismissed, detained, or suspended , a figure that’s set to rise as the crackdowns continue. At the end of October, 8% of the country was cut off from the internet in the restive Southeast regions, a total of 6 million people, as part of a reaction against citizen protest. That one week later social media sharing and messaging services have gone down is not a surprise.

These shutdowns are usually seen as preventions by the government against losing control of the narrative following an emergency situation or political event. The event this time is the arrest of lawmakers and leaders from the Peoples’ Democratic Party (HDP) who are accused of links to the outlawed Kurdistan Workers’ Party (PKK). In fact, Prime Minister Binali Yıldırım stated on November 4th that slowdowns in millions of people’s social media was part of “security measures” taken by the government.

The shutdown was first noticed by users of the ISP provider TTNet, and then on Turkcell and other major ISPs throughout the country. At that time, UyduNet users and those of other smaller ISP providers did not seem to be affected.

For many, the only way to get around ISP throttling and other restrictive measures is to use a VPN. However, Turkey is actively working on shutting down access to those VPN services. According to local reports , the Turkish Information Technology and Communications Authority (BTK) has requested that ISPs block Tor and many VPN services.

While this crackdown is affecting many VPN providers, NordVPN is still operational and offering Turkish netizens free VPN service through its Emergency VPN assistance program.

This program allows for a temporary and immediate solution to Turkey’s block against social sharing sites and services and other VPN services. It allows Turkish users the opportunity to receive immediate VPN premium services for 5 days for free.

NordVPN allows users to securely connect to a server in another country (wherever the user chooses) and the traffic is encrypted,  and then sent through that server to the destination website. Therefore, to the website, it seems as if the connection is coming from the server’s location, rather than from the user’s true location. For those looking for added encryption, Double VPN server options are available – this way your information is encrypted not once but twice.

The situation is ongoing in Turkey, as the State of Emergency continues and the Turkish government increases its attempts to censor more and more parts of the country. We will continue to monitor the situation, so check back regularly for important updates. If you have information regarding the status of additional social media blocks, please share in the comments below. Thank you!