What would you ask Santa to delete from the internet?

Most people have a list of things they would like to wipe from the web. It could be a shameful picture from your days in college or your contact information on a shady website. Since Christmas is just around the corner, NordVPN's Research Lab has conducted research to find out what people would ask Santa to delete from the internet. 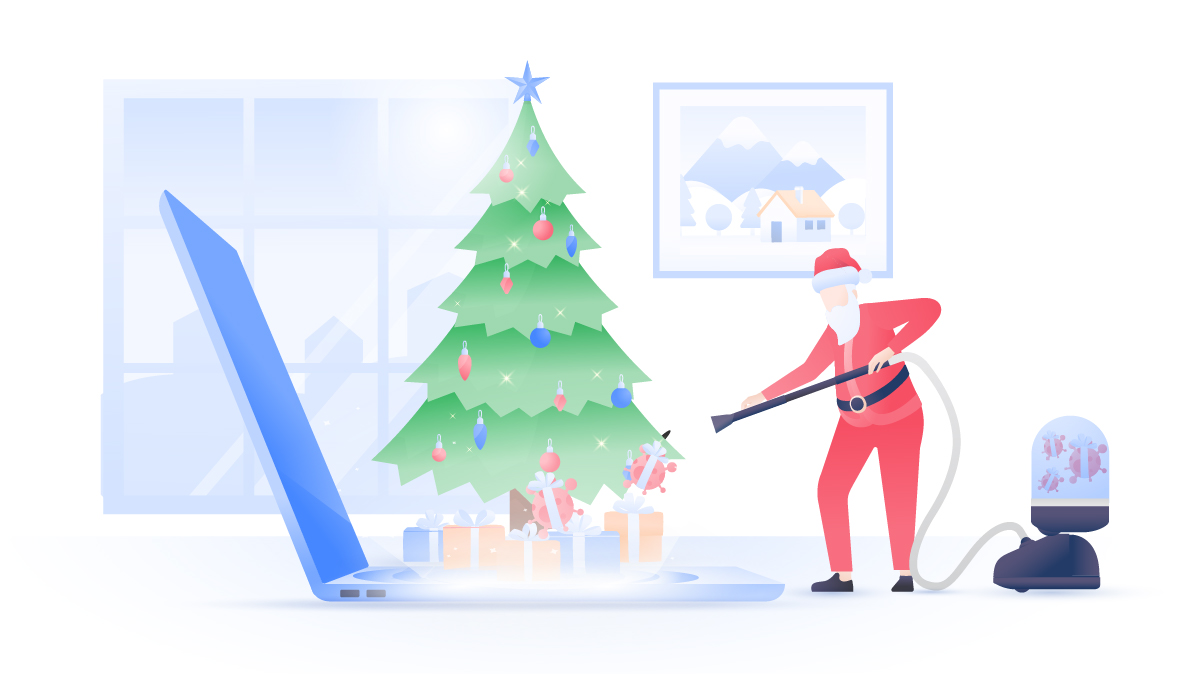 NordVPN’s Research Lab team surveyed 8,800 people in the US, Canada, Australia, UK, Germany, France, the Netherlands, Poland, and Spain to determine what they would erase from the internet once and for all.

While internet trolls represent the annoying part of the internet, the survey showed that people also care about their personal data. 13.2% would like to delete their name, email, address, and other personal information from the internet. Since this type of data could be used for identity theft and various scams, it’s no wonder that many people feel unsafe.

NordVPN’s survey has revealed that internet users got tired of social media platforms and 9% of respondents would ask Santa to delete them in a snap. These findings illustrate the dark side of the internet, which at times can be frustrating, tiring, and risky. 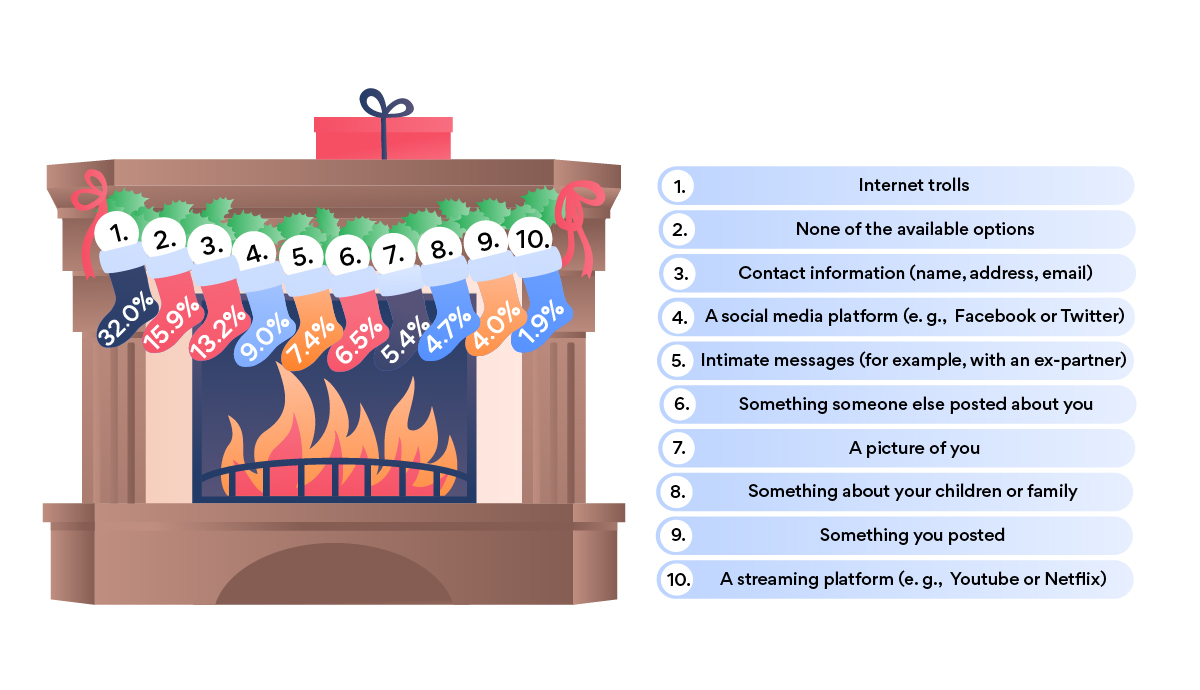 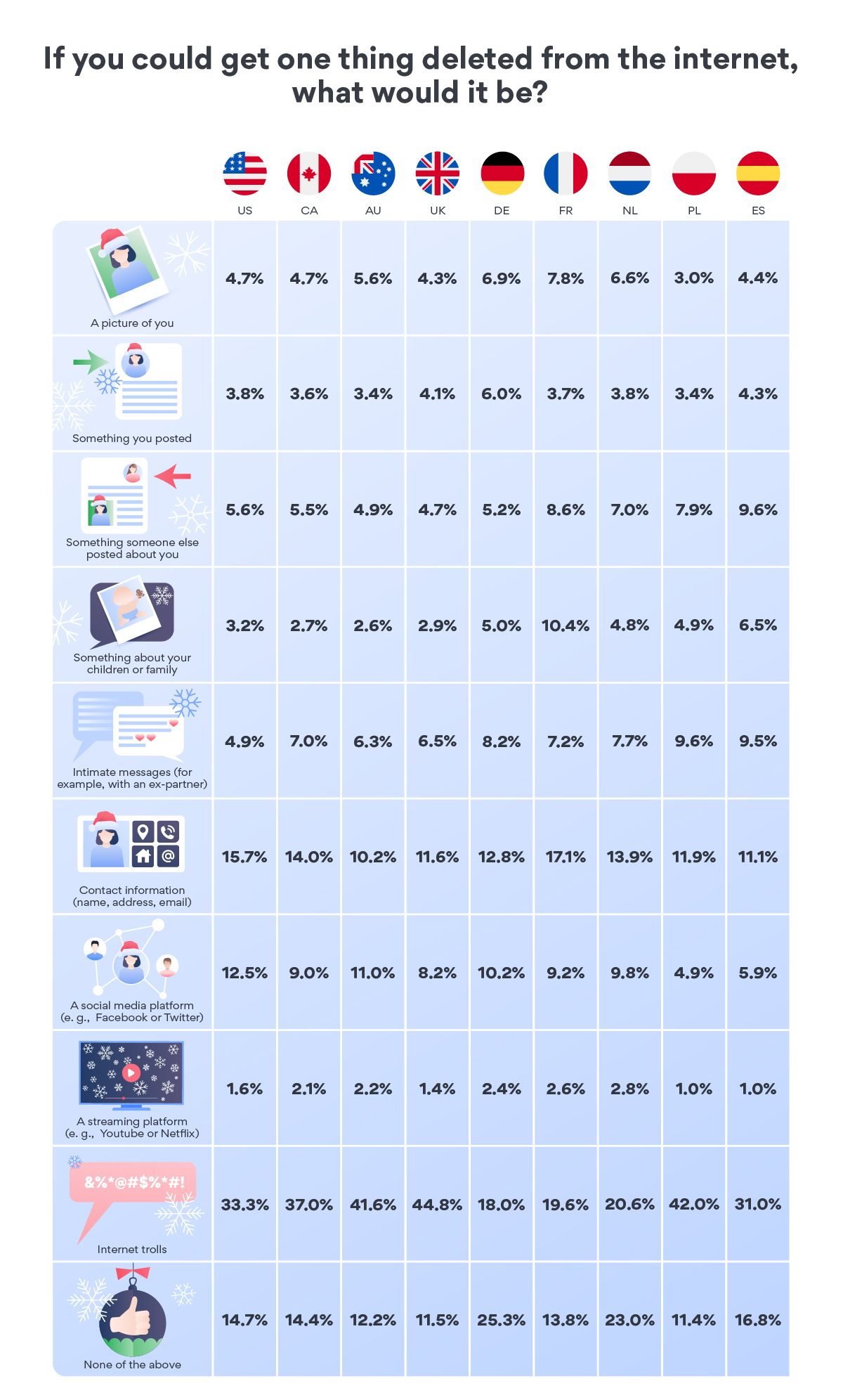 5 tips to improve your digital life

The survey has revealed that many people are not satisfied with the current internet situation. They worry about their online privacy, things others post about them, internet trolls, and many wouldn't think twice when choosing what to delete forever. Here are a few tips to improve your digital life.

Always think about the things you post on social media and how it could affect you in the long term. Sharing too much personal information could also put you at risk, as bad actors might stalk you and orchestrate a social engineering attack. It’s also a good idea to go through your social media settings and limit who can see your posts.

Since messages hide the darkest secrets of our lives, it’s best to mitigate the risk of somebody intercepting them. Choose messaging apps with end-to-end encryption, so the contents of your conversations remain private.

Avoid giving out your personal information

Various services, online retailers, and websites ask us for personal data and most of us share it without raising an eyebrow. However, we can’t be certain how this sensitive information will be stored and who will have access to it. Create a separate email for online registrations and share as little data as possible.

Internet trolls post provocative comments to annoy people, to start arguments, or just to express hate. It’s easy to identify these users on social media, internet forums, and comment sections. The best strategy to fight trolls is evading their comments and not getting involved in meaningless arguments.

A virtual private network redirects your internet data through an encrypted tunnel and hides your IP address, thus improving your online privacy and security. This means that neither your ISP nor random snoopers can see what you do online and what websites you visit. With one NordVPN account, you can protect up to six devices: laptops, smartphones, tablets, and more.