New warning in India: You could go to jail for viewing banned sites

Indian government has just issued a new warning to those who visit “forbidden” websites in India: the offenders may get a three-year jail sentence plus a fine of Rs 3 lakh ($4,465 USD). The implementation is assisted by Internet service providers. 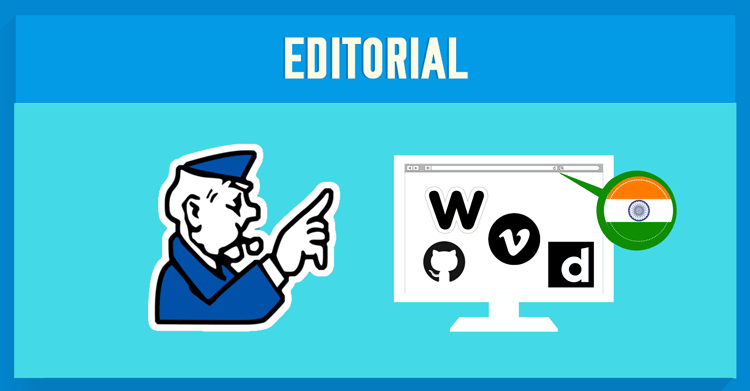 If the warning turns into action, almost every Internet user in India could become a criminal. Since thousands of websites are currently banned in the country, Internet users can easily find themselves visiting a website that is now illegal. According to the new warning , one doesn’t have to even download a copyrighted material – simply accessing a banned website could result in the penalty.

Currently banned websites include 857 new sites such as Vimeo, Weebly and Github, many of which possibly contain pornographic content.

Another target for banning are torrenting sites. This ban is strongly encouraged by Bollywood filmmakers but is in fact a violation of Internet freedom. Bollywood lawyers choose the websites to be banned without any clear criteria or reasons. Besides, torrent websites are used for various purposes: such as distributing data by corporations or uploading content for fans if you are an independent artist.

The fear for punishment for accessing banned sites can easily make India into the biggest market for VPN (Virtual Private Network) service providers. With a VPN, a person can appear to be in the U.S., while they actually are in India, and vice versa, simply by choosing a different VPN server location.

NordVPN is a strong supporter of Internet freedom.  It is not clear if the current law will be enforced, but its existence shows that government can decide to implement punishments at any time, which is a direct violation of freedom of speech.

NordVPN does not keep any logs and uses very powerful encryption to route its users’ online data.  Also, NordVPN has released a number of new apps that are very easy to use – just turn press the ON button – and choose a server of the country you want to connect to.

For journalists, activists and those who desperately need short term 'emergency' VPN access, NordVPN invites to use our 5-day emergency VPN assistance.