Cyber harassment is one of the most invasive and traumatic forms of online bullying. Some victims have been forced to flee their homes, while others have taken their lives or been shot and killed in doxxing hoaxes. Social media can be a hub for slurs and vicious comments, fostering hate that can become real-world violence. 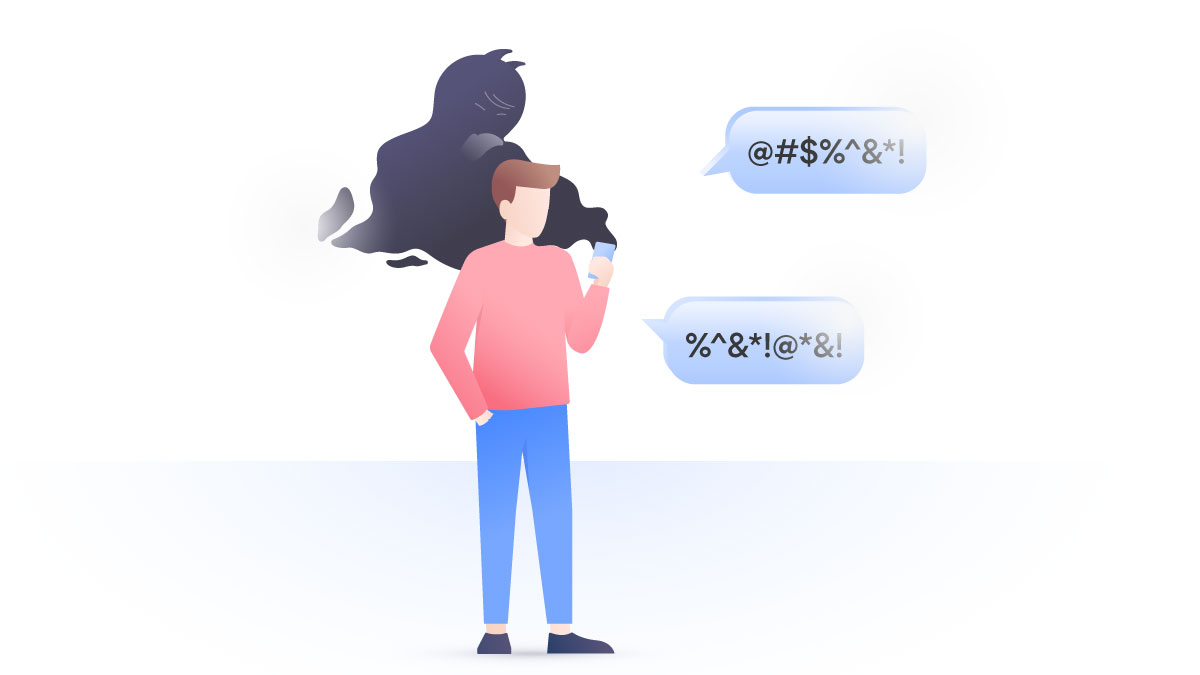 60% of young people have been victims of some form of online harassment, with the vast majority being women. It’s time to take a closer look at cyber harassment and learn what you can do to protect yourself.

What is cyber harassment?

Similarly to cyberbullying, cyber harassment is a tactic used to repeatedly offend, annoy, attack, threaten, or verbally abuse a victim online with the intention to cause distress and harm. Usually a precursor to cyberstalking,cyber harassment may have real-world repercussions. In some instances, perpetrators resort to malware or hiding GPS trackers in their victims’ cars, handbags, or children’s toys to follow their movements.

Let’s take a look at some common examples of cyber harassment and what you can do if you’ve been affected.

Trolls trudge through forums and social media, producing a never-ending stream of hateful comments intended to harass and intimidate victims. However, some “trolls” have grown much more sinister in recent years.

What to do: To fight trolls, find out if the platform you’re using has a policy for user comments. On Instagram and Twitter, you can report hateful comments on topics like race or ethnicity and have their accounts removed. You can also create an online community outnumbering the trolls, which could be a peaceful way of sending a message to those with malicious intentions.

Dating apps, forums, and social media can become rife with sexual predators, especially those that let you send private messages. Reports confirm that 40% of women have experienced dating violence online, and some had dire consequences. Amanda Todd, a Canadian 15-year-old, ended her life after two years of extortion from an online sexual predator. Whether you’re receiving constant demands for intimate photos, or someone is persistently objectifying you by leaving unwanted sexual comments, nip it in the bud before it escalates and turns into cyberstalking.

What to do: Whether sexual harassment happens at school, home, or work, you should never feel intimidated to report it. Document everything: note the date, time, and location of the incident(s), take screenshots of messages, and keep copies at home. Confide in a parent, friend, or co-worker, so they can vouch for you later if need be. Never downgrade or attempt to normalize sexual harassment. Speaking up is important and will give millions of others the confidence to do the same.

Intended to sexually harass people online, non-consensual sharing of images can be traumatizing and degrading. Sometimes perpetrators will send their victims unwanted sexual photographs of themselves to get attention, or they might send them as a precursor to more serious action. In some cases, criminals upload their victims’ photos or videos to websites and forums, with personal information attached. They might blackmail victims or threaten to send the photos or videos to their employers or family. In each case, it is a deliberate act of violence and dominance that should be treated as a serious crime.

What to do: You can start by blocking the person sending you non-consensual images on social media. Sharing intimate photos or videos without consent is illegal in many countries. You may be able to approach a lawyer about filing a case against the people threatening you. An injunction or court date will hopefully be enough to scare off your perpetrators.

This is a revenge tactic where hackers infiltrate your device and collect your personal and private information to publicly release it online. Doxxing is a type of online harassment designed to violate your sense of security and cause you to panic, lash out, or shut down.

What to do: There are plenty of products that keep your information safe from hackers. Nordlocker lets you store your sensitive files and photos in an encrypted online vault with a super-secure password. If you live in the EU or Argentina, the “right to be forgotten” lets you petition a search engine to remove search results about you.

If you thought online harassment can’t affect you in real life, think again. Swatting is a criminal harassment tactic of tricking an emergency service into sending armed personnel to a person’s address. With false reports of a bomb threat or a murder or hostage situation, swatting can only be described as a life-destroying prank. It terrorizes victims, wastes thousands of tax dollars, risks lives, and causes entire families to undergo weeks of precautionary investigation. In 2017, a police officer shot and killed a man in a swatting incident. The police were called to his house as a hoax for an argument over a $1.50 bet on a videogame. One swatter arranged for heroin to be delivered to a victim’s home right before response teams arrived — in an attempt to frame him for drug charges.

What to do: Swatting is a serious crime in most countries, and can carry fines of up to $150,000 in the US. Never divulge personal information on gaming forums – they’re a hotbed for swatters, harassers, bullies, and hackers. Always avoid using screen names that make it easy for strangers to identify you through other channels, such as your social media. More on that below.

Can the law protect you from cyber harassment?

Although the law has a reputation for being slow on cybercrime, the new EU data protection laws and several US privacy bills help tremendously in prosecuting cyber harassers. In 2004, New Jersey was the first US state to criminalize the sharing of sexual images without consent. Victims of cyber harassment in the U.S can also choose to sue perpetrators through tort law, otherwise known as civil wrongs. Torts of defamation, emotional distress, harassment, and public disclosure of private fact may all stand up against a court of law. So rest assured that your distress is not underestimated just because it took place in the online world.

NordVPN is a Gold supporter of Stop Cyberbullying Day

Every year, Stop Cyberbullying Day unites advocates around the world in raising awareness about the difficulties and dangers of cyberbullying. It's hard to imagine a free and inclusive internet if there are people who feel threatened or unwelcome when using it.

Never feel intimidated to report any form of harassment. Staying quiet about such incidents only empowers online predators to continue. If you’re cyber-harassed at work, HR teams are trained to deal with these situations. If you're experiencing cyber harassment at school or university, report the incident to your mentors or the police if you need to.

There are places that can help

The main thing to remember is to document everything, especially if the harassment continues. This way you have proof of your claims, which can help expedite your case in court. Luckily, there are plenty of groups online to help you: Cybersmile offers support centers for victims of all kinds of cyber harassment, so you can exchange stories and tips to feel less alone. If you want to take more serious action, visit your local citizens’ advice bureau or contact a lawyer to find out what your legal options are.

Cyber harassment is a dangerous violation of privacy. Step up your personal security online with NordVPN.

In Depth · 5 min read What are the most common social media privacy issues? Jomilė Nakutavičiūtė · Mar 18, 2022