Tor vs. VPN: what’s the difference?

If you refuse to be monitored and want reliable online protection, you might consider using Tor or VPN services. But their functions often overlap, creating some big differences. Read on to discover the best option for you.

Tor (short for “The onion router”) is a network used for anonymous communication. It has lots of servers scattered around the globe that are maintained by individual volunteers. This makes Tor connections difficult to intercept as they do not rely on a single company or organization. How does Tor work?

The fourth step is the most sensitive one as the message could be visible to the person or organization operating the exit node. Anyone can set up a node, so its security depends on the owner. The only solution here is using an HTTPS connection, which is itself encrypted by transport layer security protocol (TLS), or an Onion Over VPN feature.

Is Tor safe? By operating both guard and exit nodes, someone could identify Tor users and their messages. An organization operating a large amount of Tor servers could intercept users, but it is unlikely that a single individual could do this. Organizations like the National Security Agency (NSA), however, could have the resources and desire to monitor the Tor network in this way.

Check out our video on VPN vs. Tor below.

No, it isn’t. Tor is a browser and only encrypts the data transmitting through the browser. A VPN is specific privacy protection software and encrypts all data coming out of a device, whether it comes from a browser or an app.

The key difference between a VPN and Tor are their operation methods. While a VPN encrypts and routes your traffic using a network of servers maintained by a centralized entity, Tor is a decentralized network operated by volunteers.

It is less user friendly, transparent, and much slower and more complex. However, it is still a powerful tool. If you need accountability, safety, and privacy, you should use a reliable VPN provider while using the Tor browser.

Using the Tor browser for anonymous communication and browsing online is legal in most countries and you don’t need to worry about getting in trouble. As long as you’re not involved in criminal activities, you can freely use the Tor browser.

Is Tor illegal anywhere? There are a handful of suppressive governments like China that restrict the use of the Tor browser and limit the freedom of speech. Using a VPN or Tor is often the only way for the locals to communicate with the outside world.

Software Is Tor browser safe to use? 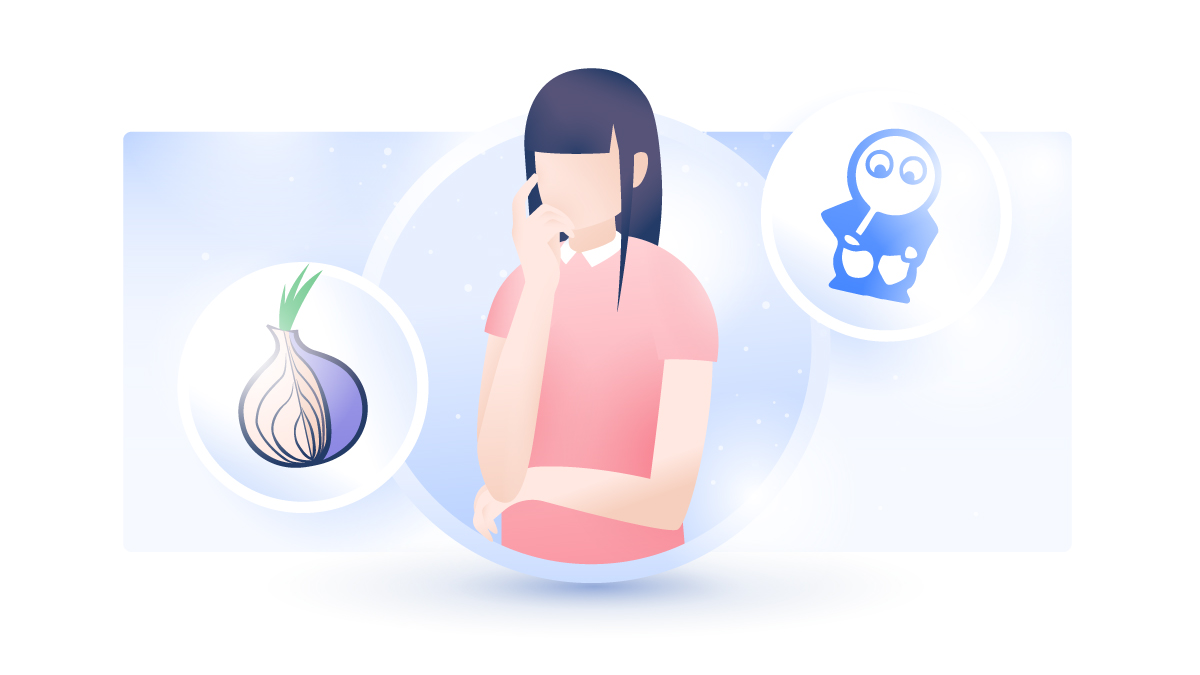 Apps What is I2P and how does it work?

What is VPN software?

A VPN, or virtual private network, encrypts your data and sends it to an intermediary server. VPN service providers operate many servers in different locations and offer different VPN protocols and features, giving you plenty of choices. Comparatively, Tor encrypts your connection by routing through a randomized sequence of volunteer servers.

VPNs also encrypt your internet traffic, making it invisible to hackers and snoopers. Premium VPNs use top-grade 256-bit encryption systems, which are impossible to brute-force using any currently known and available device. With a VPN enabled on your gadget, you can hide your IP address and enhance your online privacy.

Protect your online identity with a VPN.

As you can see, it requires way fewer steps than Tor to ensure security and privacy.

VPNs also encrypt your data, and hide your IP address. It’s easy to tell who runs the servers when it comes to reputable VPN providers, so the whole procedure is more transparent. There is always somebody accountable for the service, and they usually provide customer service. This makes it more stable and reliable than the Tor browser.

VPN and Tor: can they be used simultaneously?

You can use both Tor and VPN at the same time. The first method is accessing the Tor network by connecting to a VPN server beforehand. In this case, the Tor entry node operator will not see your IP and your ISP won’t know you’re using Tor. This also lets you bypass restrictions preventing you from accessing the Tor network. However, this method won’t protect you from malicious exit nodes as your traffic will be unencrypted when it reaches them.

If you go Tor > VPN, your traffic will be encrypted when it enters and exits the Tor network. You will need a special VPN provider that supports such a connection. While the VPN encryption protects you from malicious exit nodes, your ISP will be able to see that you are using Tor. However, you get less anonymity. Also be aware that both methods slow down your internet more than Tor already does.

If you wish to use the first method, check out NordVPN’s specialized and integrated Onion Over VPN feature.

Tor vs VPN: which is better?

Tor and VPN are two different tools serving different purposes. While there are multiple VPN providers, there is only one Tor network. When you connect to a VPN, your internet traffic is encapsulated in an encrypted tunnel, while Tor uses several layers of independent nodes.

Even though Tor and VPN applications overlap, there are more differences than similarities. VPN services provide you with transparent service and privacy protection, while Tor has less accountability and can be a potential target of security agencies.

We recommend using a VPN as it has way more features, more transparency, and high-end encryption mechanisms. Moreover, it won’t slow down your internet connection. VPN can protect your traffic in a more transparent way than Tor.

Is Tor browser safe to use?