From zero to hero: timeline of NordVPN’s growth and success

NordVPN's story began in 2012. Four childhood friends came together to build a product that could liberate the internet. All of the founders had their 9 to 5 jobs at other companies but were giving their best to create the technology they believed in.

The beginning of NordVPN was very modest: it was only available on Windows, users had to self-conIigure it, and it had one server in Germany. By the end of 2012, NordVPN had six servers. “We used to mark these servers on a map on our ofIice wall. It later became our symbol and an inspiration — when creating our Iirst apps, we duplicated this map for easy server selection,” says Ruby Gonzalez, Head of Communications at NordVPN.

In 2013, NordVPN celebrated its Iirst signiIicant milestone — 1000 users. “In those Iirst years, we had three people working for customer support, four in marketing and product, and Iive developing apps and taking care of infrastructure. We had no CEO, CTO, CMO, or any other C level employee. Everyone was doing everything. If someone was skilled in writing code and also happened to know something about grammar — well, we could use copywriters. If someone could do front-end, then hey, they must obviously know something about web design. It was a small amazing team, and everyone did the best they could,” says Ruby Gonzalez, Head of Communications at NordVPN.

NordVPN launched its Iirst native app for Windows in September 2013. However, as the growth was still slow, other apps didn't arrive until much later. In fact, the next apps for iOS and macOS were launched in 2015 only. Then the Android app came out in 2016, and the apps for Android TV and Linux followed in 2018.

Even though NordVPN wasn't available on all devices, by the end of 2014, the company celebrated its Iirst 10,000 users. “We are convinced that the reason for this success was the 24/7 customer support, introduced in September 2014. NordVPN was the Iirst among premium VPNs to launch such a service. Knowing the importance of our support team, we keep strengthening and improving it further. We call our customer support “Success Managers,” as we truly believe that customer satisfaction is the ultimate key to the success of NordVPN,” says Ruby Gonzalez, Head of Communications at NordVPN.

In 2015, the company finally realized that it could be a global brand. The biggest reason for that was the Australian data retention law, which required Australian internet service providers and telecommunications carriers to retain customer metadata. The private information, such as the device location or sender's email address, had to be held for at least two years. This controversial law led to NordVPN's popularity skyrocketing — in just a few days, the company doubled its customer base. It was clear that people took their privacy online very seriously.

Continuing to realize its global impact, the company started a social responsibility program, providing the Iirst emergency VPN in Uganda. During the 2016 general elections, Ugandan authorities resorted to shutting down entire social media platforms twice. “As our main goal is to liberate the internet, the social responsibility program is a no brainer for our company,” says Ruby Gonzalez, Head of Communications at NordVPN.

2017 marks the beginning of an incredible bout of growth: both in users and staff, along with the expansion of features and services. “The enthusiasm that led to starting this company has not gone away. Things haven’t always gone smoothly, and we haven’t always achieved what we wanted. However, every time we made a mistake, we made sure we’ve learned something from it and tried to do even better next time. That's our recipe for success,” says Ruby Gonzalez, Head of Communications at NordVPN.

In November 2018, NordVPN took an even further step towards improving its service and completed an industry-Iirst audit of its no-logs policy. “The trust of our customers is vital, and we wanted to prove we keep no logs of our user activity. And that was not our only audit. In 2019, third-party penetration testers checked our apps, while a full infrastructure audit is planned for this year,” says Ruby Gonzalez, Head of Communications at NordVPN.

“Our company has no plans to stop growing – our ambitions are very high. We are incredibly excited about the future, and we are committed to serving our users and offering the best product on the market. We will also focus on transparency and trust between our clients and us,” concludes Ruby Gonzalez, Head of Communications at NordVPN. 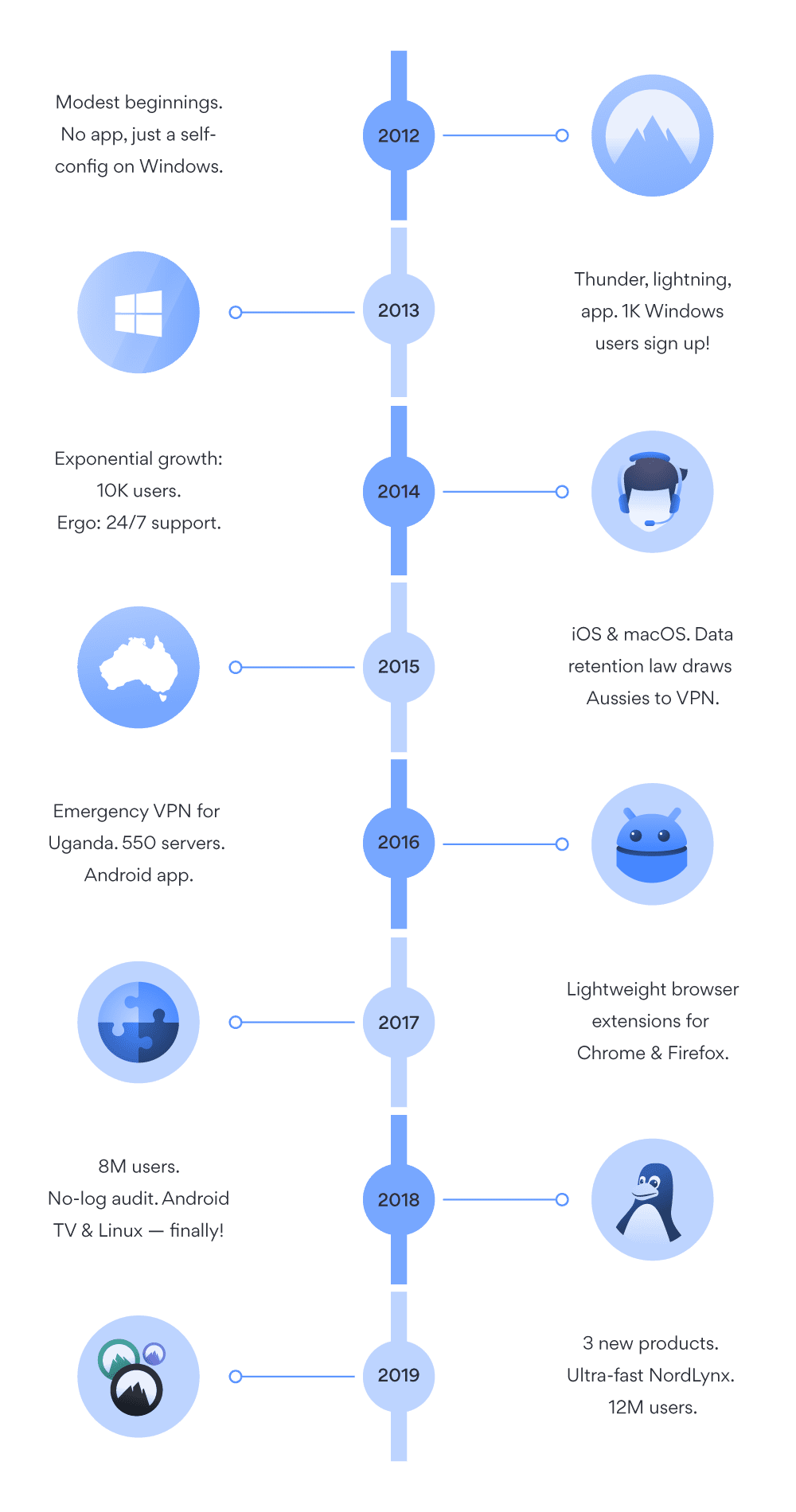