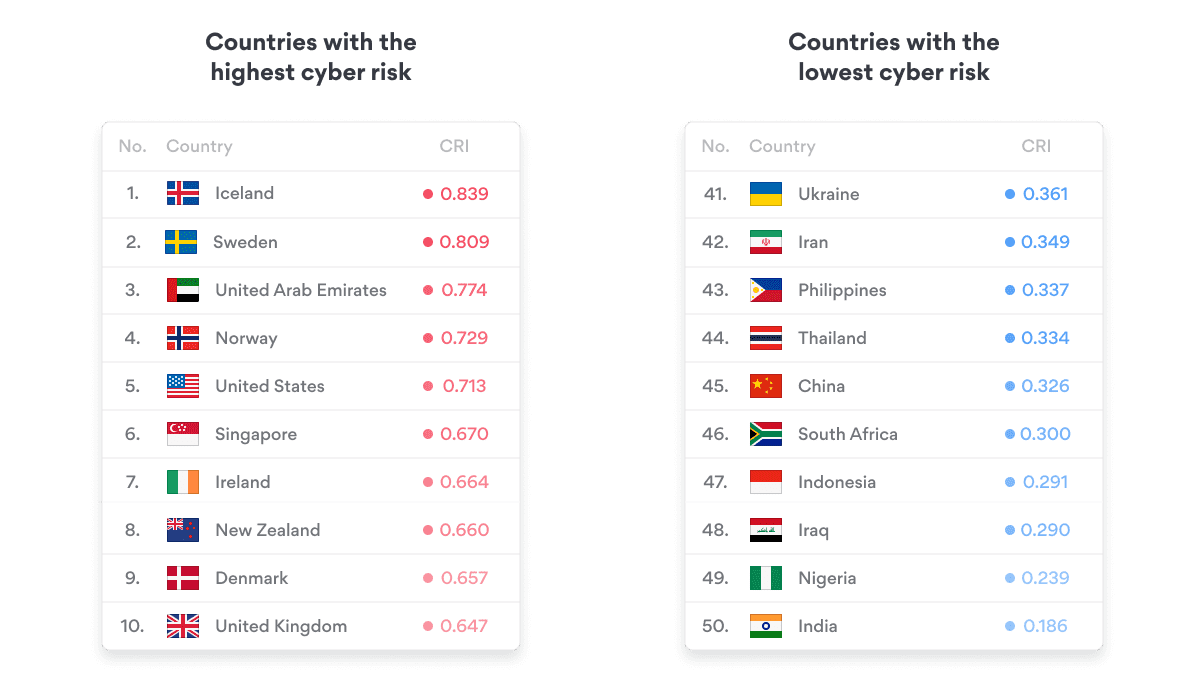 The most dangerous place to be online

Northern Europe is the most dangerous region when it comes to cyber risk, while North America is a close second. In both regions, more than 9 out of 10 people use the internet, 8 out of 10 shop online, and 7 out of 10 use Facebook. This leads to increased exposure to cyber threats.

“Cybercriminals don’t look for victims, they look for opportunities — much like pickpockets in crowded places,” says Daniel Markuson, a digital privacy expert at NordVPN. “Spend enough time in a packed bus, and a pickpocket will ‘accidentally’ bump into you. Same story online. Your cyber risk increases with every extra hour online.”

The average monthly wages in Northern Europe and North America are among the highest in the world. “As your income increases, it’s only natural to enjoy the comfort of online shopping and other paid services. But that makes you a much more enticing target for cybercriminals.”

India is the safest. Or is it?

In India, only a third of the population use the internet, and less than a quarter have smartphones. A tiny share of all Indians use Instagram (5.8%), watch video on demand (7.1%), or play online games (6.6%). The monthly wage in India is 13 times lower than the average of the 50 countries analyzed. That makes India the safest country covered by NordVPN's Cyber Risk Index. But there are some important caveats.

“Cyber Risk Index reBlects the big picture, the country-wide statistics,” says Daniel Markuson, NordVPN’s digital privacy expert. “Indians who do use the internet, spend a lot of time online — more than an hour longer than the average. They probably live in cities and get higher wages. That puts them at a much higher cyber risk than the average Indian.”

In countries with huge income inequality, low levels of urbanization, or low internet penetration, a small segment of the population may face a much larger cyber risk than the general population.

The method behind the Cyber Risk Index

Finally, NordVPN trimmed the data down to the 14 most significant factors, used them to create the Index, and ranked the 50 countries according to the cyber risk they're facing.