An Overview: Surveillance Practices in Thailand 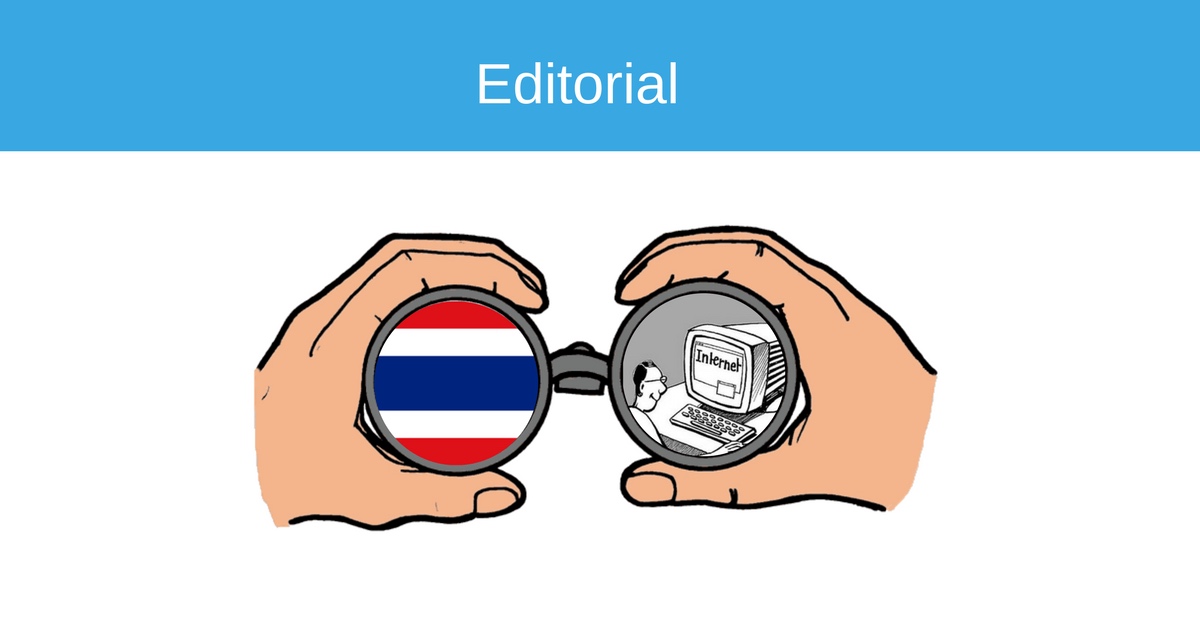 In Thailand, a man was sentenced for 35 years in prison for sharing Facebook posts deemed to be offensive to the Thai royal family. It is the harshest penalty to date for a crime like this. However, it seems to be just a ‘cherry on top’ of Thailand’s long history of Internet censorship and surveillance.

Thailand is ruled by junta, a military-led government, that took over the control in May, 2014. Since then, Internet censorship has been growing year by year, together with ever-expanding invasion into citizens’ private communications. The monarchy cult is what stands behind the strict censorship, as the king is the central figure of the Thai society. The royal family is protected from any type of insults and threats – the lèse-majesté  (term coming from the laesa maiestas, an “injured majesty” in Latin) – by law. The law isn’t a unique case of Thailand – many monarchies all around the globe have ones, but Thailand’s law against lèse-majesté definitely stands out as one of the most rigorous out there. The law envisages harsh punishments for persons who “defame, insult or threaten the King, the Queen, the Heir-apparent or the Regent”, as stated in the Section 112 of Thailand’s criminal code. People accused of breaking the law may be imprisoned for a minimum of 15 years, which sometimes might turn into up to 60 years. However, in most cases the period is halved when pleaded guilty. Thailand’s lèse-majesté  law is considered to be highly controversial, as there is much room for interpretation of what makes an insult to monarchy. Among the most highly-publicized cases, there’s a man who was accused for posting a sarcastic photo of the King’s dog on Facebook, a man with a history of mental illness who tore a portrait of the King and was sentenced to five years in prison, or a 48-year-old tour operator who got punished by 10 years in jail for each of the six Facebook posts he made about the royal monarchy. Recently, Thailand’s lèse-majesté has received attention from the United Nations: it calls for Thailand to make revisions to the harsh law. Their arguments are more than strong – since 2014, the number of cases investigated as violations of the law has doubled if compared to 12 years prior to the military coup. What is more, only 4% of those cases ended with the accused people being acquitted.

In Thailand, citizens are not allowed to express critique for either the monarchy or political authorities. Those who show different thinking fall on the radar of surveillance agencies. As a result, journalists, academics, opposition leaders and basically anyone expressing their criticizing opinions can get arrested. Knock knock! Who’s there? It might be a military official’s invite for an ‘attitude adjustment’ session. The ‘attitude adjustment’ is a method practised by the junta to neutralize its critics, which means being detained without a clearly stated charge. The ‘treatment’ includes interrogation by army officials, after taking the blindfolded detainee to the designated facilities. Depending on the detainee’s attitude towards the ‘adjustment’ process, the facilities may range from a tiny room with no windows to a spacious army camp.

Social media surveillance puts a serious threat to the right of privacy of Thai people. The military-led government of Thailand employs extensive techniques and has designated substantial resources to identifying people who spread monarchy-defaming speech on social networks. A 60-70-person team at the Technology Crime Suppression Division (TCSD) – Thailand’s police unit specialising in cybercrime – constantly keeps an eye on social networks’ feeds. They are monitoring and scanning for lèse majesté offensive content, and have a power to investigate, arrest and charge accused authors.

Facebook seems to be one of the main targets of the government for surveilling its’ people. Right after the junta took power after the May 2014 coup, Facebook was temporarily banned by the Ministry of Information and Communications Technology in order to prevent the rising critique for the ongoing political actions from spreading. Even though Facebook was unblocked pretty quickly, more recent events signal an ongoing intention of Thai government to increase its’ control over content posted online. In 2016, Facebook complied with the junta’s request to block 50 content units deemed to insult Thailand’s monarchy. This year, the government has demanded for 131 Facebook web addresses to be taken down as violating the lèse-majesté law. While waiting for a decision from the social media giant, the Thai telecom regulator said that no immediate plans to ban Facebook are being discussed.

Some of the surveillance practices are developed to involve Thailand citizens and, what’s even more threatening, at a young age. Cyber Scouts, a state-backed initiative coordinated by the Ministry of Information and Communications Technology (ICT), recruits Thai teenagers to monitor social media in search for any lèse-majesté content and what they call “distorted information”. Gamification is added to the Cyber Scouts program by giving points for reporting anything that violates Thailand’s law and showcasing the best performing ‘scouts’ on the program’s website. Citizen-led initiatives are also prevalent. Ultra-royalist groups, such as The Rubbish Collection Organisation and Social Sanction, are aiming to stop the violations of the lèse-majesté law in their own ways. With its’ surveillance program and by encouraging citizens to inform on each other, the government has created an atmosphere where people feel justified when denouncing each other, as noted by the Privacy International.   Things happening in Thailand very much reminds of the of the plot of ‘1984’ by Orwell, with the Big Brother always watching. Unfortunately, Thailand’s situation is not fiction. The extreme lèse-majesté law, social media no longer being a safe space to express thoughts, military officials showing up at the door with the invitation for an ‘attitude adjustment’, citizens policing each other and the overall government’s desire to control the Thai population show there is very little, if hardly any, freedom of expression and privacy left in Thailand. Just to stay on the safe side, using a VPN service, such as NordVPN, in Thailand is highly recommended. Even though it won’t protect users from the consequences that may come from what they share publicly on social networks, VPN will keep the browsing history private and away from the eyes of Internet Service Providers (ISPs) by hiding and replacing the IP address. This way, users may visit any website they like without the fear of being accused for accessing content considered unfavorable by the government.

Verified author
Eglė is a UX writer at NordVPN. She designs delightful user experiences with words and shares product updates with our blog readers.
Next read